A Twitter user identified by her handle as @pr_titanium1 has narrated how her elder brother raised and catered for a child that wasn’t his for the period of four years.

The lady disclosed that her brother and the child had a very striking semblance which ordinarily won’t give room for any suspicion. However, a DNA test proved that the child was another man’s seed after four years.

She, therefore, urged men to fear the opposite gender and be very careful in dealing with them.

“My elder brother once raised a child that wasn’t his for good FOUR YEARS & if you see this child,you’ll think my brother vomits him which led to chaos in d family. Thank God for DNA test. Yes, I’m a woman but Men pls FEAR US &be extra careful out dia.” 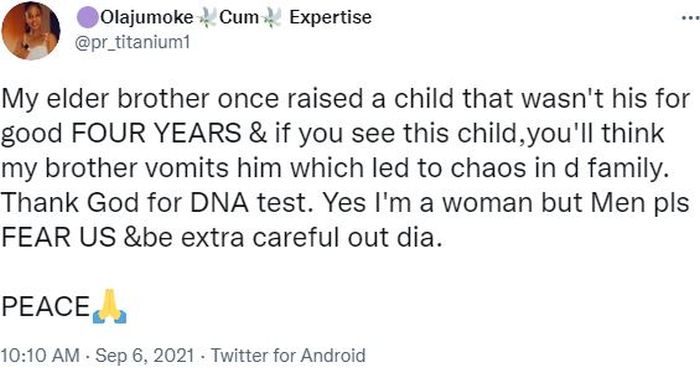 What Do You Think About This?

The post “Men Please Fear Us”- Lady Says As She Recounts How Elder Brother Raised A Child That Wasn’t His For Four Years appeared first on Naijaloaded | Nigeria's Most Visited Music & Entertainment Website.