Via his Instagram post, Yul Edochie stated that indeed he believes that his colleague, Zubby Michael owns that spot as the Richest Nollywood actor 2021.

He posted a photo he took alongside Zubby and wrote, 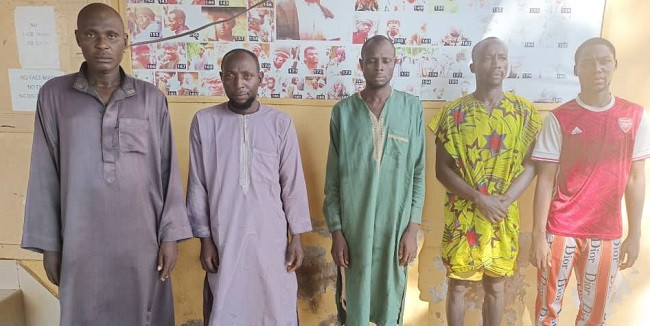 Operatives of the Kwara State Police Command have arrested five suspected ritualists for the murder of a commercial sex worker in Patigi Local Government Area of the state.

Spokesperson of the command, Okasanmi Ajayi, who disclosed this in a statement in Ilorin on Friday, September 10, gave the names of the suspects as Samuel Peter Tsado, Mohammed Gbara a.k.a. Madi, Abubakar Mohammed a.k.a. Mallam Baba Pati, Mohammed Ahmadu Nma and Bala Karin and three others at large.

According to the PPRO, the victim identified as Abigail was lured from the hotel where she worked, taken to one of the suspect’s home and beheaded for money ritual purposes.

“In continuation of the effort of the Kwara State Police command’s commitment to ensure people of Kwara State sleep at night with both eyes closed, the Commissioner of Police Kwara State, CP Tuesday Assayomo, wishes to inform of the command’s investigation of a reported case of a missing person turned homicide,” the statement reads.

“On June 29, 2021, at about 23:08hrs, an unknown young person, later identified as Samuel Peter Tsado ‘m’ of Patigi town in Patigi Local government area of Kwara State, went to one Victory Hotel Patigi and requested for the service of a commercial sex worker by name Abigail ‘f’ (other names unknown)

“After the monetary negotiation of N5,000:00, both Peter and Abigail left the hotel premises to an unknown place, ever since then both of them were not seen again. On the receipt of the report of a missing person, the commissioner of police, who suspected a foul play directed the case be taken over by the State Criminal Investigation Department (SCID) for a discreet investigation.

The investigation led to the arrest of Tsado, who confessed that he actually contracted the deceased for sex.

“He also confirmed that he and one Mohammed Gbara a.k.a. Madi, both agreed and planned how to make money ritual and in furtherance of their desires, they planned on how to source for the human head that would be needed for the money rituals which prompted him to leave his house at Patigi for Victory hotel with his motorcycle where he approached the late Abigail, a sex worker, who agreed to follow him home after agreeing on N5,000:00 for the night.

At Samuel Peters’ home, where Mohammed Gbara was already waiting, Abigail was strangled by the duo of Samuel Peter Tsado and Gbara.

“The head of late Abigail was severed with a knife. The headless body of the deceased was conveyed by the suspects on Samuel Peter Tsado’s motorcycle and dumped in the bush along Patigi/Rifun road

“Both Samuel and Mohammed went separately away to reassemble in Bida, Niger state on June 30, 2021. While in Bida, the deceased head was kept in Mohammed Abubakar’s home, awaiting the arrival of the ritualist from Maiduguri in Borno state for the money ritual exercise

“Investigation took detectives to Bida and Minna in Niger State where three other suspects were arrested. They confessed to the offence and also confessed to have been involved in an earlier ritual attempt using the hand of one victim yet to be identified

The Commissioner of Police, CP Tuesday Assayomo assured members of the public of the safety and security of their lives and property applying every available resource both human and material.

The CP stated that this can only be achieved with the cooperation and collaboration of the people.

“The Command for the umpteenth time wishes to emphasize that Kwara State will be made uncomfortable for criminals of whatever nomenclature, as such, criminals are advised to turn a new leaf or relocate from Kwara State permanently.” the police boss added.

Nollywood actor, Yul Edochie has slammed those criticizing Big Brother housemates, Tega and Boma, for their escapades while they were still on the show.

Tega and Boma have been trending for the past two weeks following the sudden affair that brewed between them in the house.

The duo received backlash from viewers who felt their actions were a bit immoral considering the fact that Tega is a married woman with a kid.

Their actions, it is believed, led to their untimely eviction on Sunday night.

He further wondered why Nigerians can never be pleased.