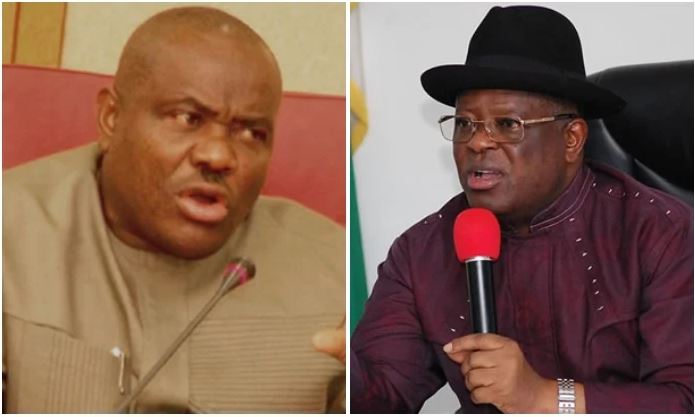 Rivers State Governor, Nyesom Wike, on Wednesday knocked his Ebonyi State counterpart, Dave Umahi, who said that God will give Nigeria a president “who has a good heart like President Muhammadu Buhari for the good of this country” in 2023.

Umahi had made the statement on Monday while addressing State House correspondents after meeting with the President, Major General Muhammadu Buhari (retd.), at Aso Villa in Abuja.

But speaking on Wednesday, Wike, in a veiled reference to Umahi, said that his colleague had lied, adding that the President himself knows that God won’t give the country another leader like him in 2023.

The governor spoke at a stakeholders’ meeting in Port Harcourt, the state capital, while addressing business owners in the state on the controversy around Value Added Tax.

Wike, who lamented the injustice in the country under Buhari and the worsening security situation, insisted that business owners in the oil-rich state must begin VAT remittances to the state government beginning September.

The governor said Rivers generated N15bn in June 2021 but got N4.7bn while “Kano produced N2.8bn in June but Kano also got N2.8bn. Sometimes you don’t want to believe these things exist”.

“That was how a governor was saying that he prays that Nigeria gets another President like Buhari.

“I said what has gone wrong with him? You mean there shouldn’t be (a) psychiatric check on the governor? Sycophancy.

“And you know that President knows that you are telling lies to him. He (Buhari) knows.

“It is unfortunate. May God help us.”

Wike and Umahi have been at loggerheads since the latter’s defection from the Peoples Democratic Party to the All Progressives Congress in November 2020.

Rivers State Governor, Nyesom Wike has appealed to the United Nations and other world bodies to mount pressure on President Muhammadu Buhari, to conduct a free and fair elections in 2023.

Wike urged the United Nations agencies in particular to continue to advocate for a free, fair and transparent electoral process in Nigeria.

Wike stated this during a Working visit by the United Nations Resident and Humanitarian Coordinator, Edward Kallon, at the Government House in Port Harcourt.

Wike spoke during the visit through his Deputy, Ipalibo Harry-Banigo.

He said Rivers State believes that strengthening democratic Institutions was the way to go.

“In all our activities, we always operate democratically. In the last two Local Government elections, we have had, we had inclusiveness of women not only as Vice Chairmen, but also councillors.

“We believe strongly that we have to support democratic institutions in Nigeria, and demonstrate it here in Rivers State, where we have the opportunity to do it, and also to develop strong institutions in education, health, infrastructure and in human capital development.”