Popular Nigerian disc jockey, Florence Otedola, better known as DJ Cuppy, has said that it’s better for her to cry in a Ferrari than cry on a bicycle.

According to the “Gelato” crooner, money has never defined her but then again she would rather cry in a Ferrari than cry on a bicycle.

“I would say no but then it’s easier and nicer for me to cry in a Ferrari than it is on a bicycle in the cold.”

The post Do You Agree?? “It’s Better To Cry In A Ferrari Than On A Bicycle” – DJ Cuppy appeared first on Naijaloaded | Nigeria's Most Visited Music & Entertainment Website.

Popular Nigerian disc jockey, Florence Otedola, alias DJ Cuppy, found a reply to a troll who criticized her dressing and called her dirty-looking.

The â€˜Gelatoâ€™ crooner posted a picture of herself on her Instagram page from her room in London.

A follower then slammed her in the comments section and told her to work on her skin.

Billionaire daughter and musician, Florence Otedola better known as DJ Cuppy, has taken to her social media page and explained why she is still single.

DJ Cuppy has finally revealed why she is single and obviously, not searching

The controversial Dj took to her Instagram account to provide the answer to a fan burning question. According to Cuppy, the reason she is still single is that â€˜Sheâ€™s way Too Sexyâ€™.

She revealed that she came to the above conclusion after critically analyzing the reasons why no man wants to date her.

Her answer is coming hours after a tweep informed her that she might never find true love because of her fatherâ€™s money â€“ whoâ€™s your daddy?

Whilst the single ladies have successfully converted Tiwaâ€™s song, Somebodyâ€™s Son to be their anthem, Cuppy is trashing any advice that will help somebodyâ€™s son find her one day.

A Twitter user identified as Remi felt he should tellÂ CuppyÂ why she wonâ€™t be able to get a man. According to him, it will be difficult to find a boyfriend because of her status #billionairedaddy. He informed her that her family money will always attract fake love and she will need to go the extra mile to get a man. Hmmm.

Reacting to his tweet, Cuppy once again begged her followers to stop giving or sending her relationship advice. She stated that she is not in need of their unsolicited advice. 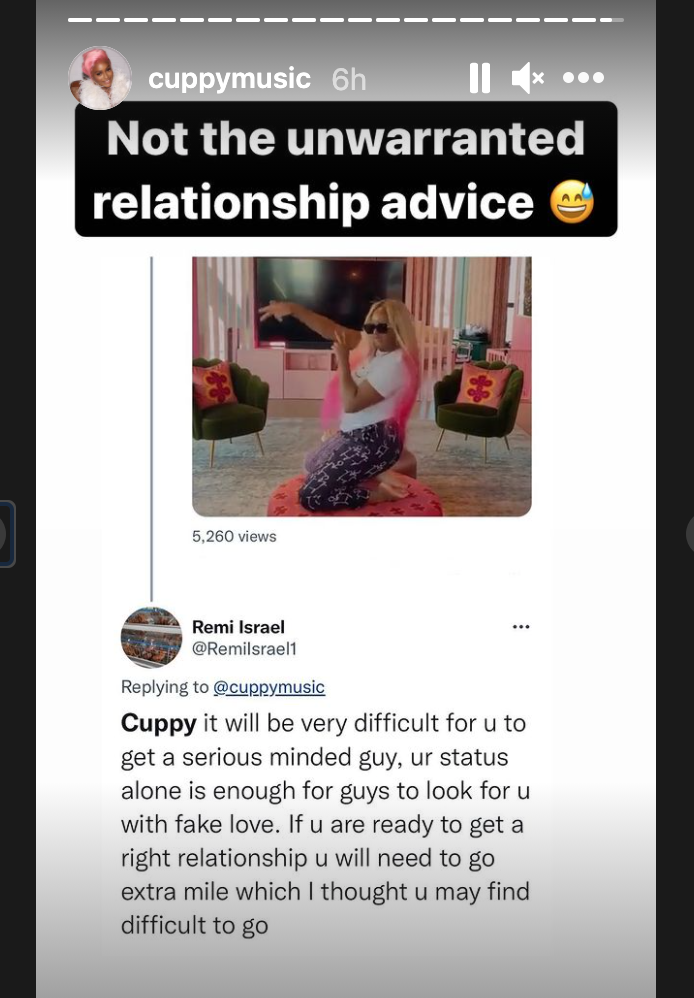