Nigerian singer, Wizkid has unsurprisingly found himself on the Twitter trends table.

This time he is trending following a debate initiated by a tweep identified as Regha Daniel yesterday.

According to this Twitter user, Wizkid isn’t a good artist, but just someone with good luck and vibes. She stated that Wizkid is nothing but mild songs, mild songs, and mild songs.

Speaking on Essence’s buzz and the achievements it has cracked, the tweep revealed that it was all grace. According to her, if someone removes Wizkid’s grace, what is left is just grass. Ouch! 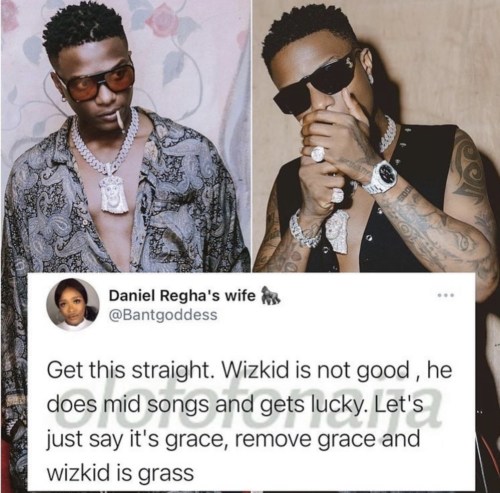 When other Twitter users joined the conversation and brought the comparison between Wizkid and Bella Shmurda, Regha revealed that Bella Shmurda is far ahead of Wizkid.

According to her, Bella Shmurda has more talent than Wizkid, Wizkid is just pride and unnecessary vibes. She further added that Wizkid was just lucky on Essence and he should also thank Tems for helping him sell his market. 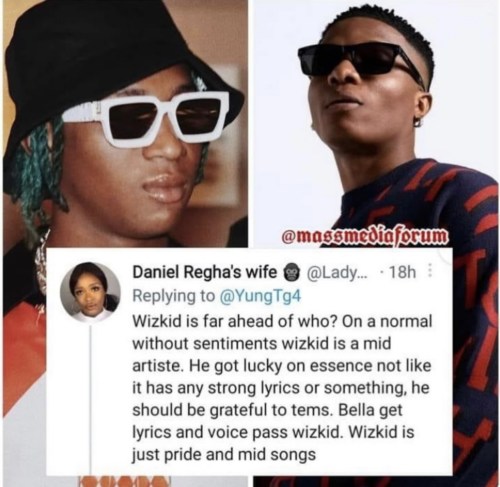 The post SENSE OR NONSENSE? “Wizkid Is Not Good, Bella Shmurda Get Lyrics & Voice Pass Am”- A Twitter User Says appeared first on Naijaloaded | Nigeria's Most Visited Music & Entertainment Website.